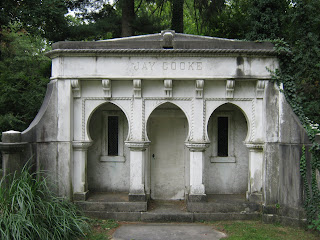 When you grow up in a certain area, you often take for granted some of the interesting local history. Such was the case with me and the area where I grew up: Wyncote, Cheltenham Township, Pennsylvania. While Wyncote has some interesting history in its own right, nearby Elkins Park has some really interesting relics of times past. It took me moving to Duluth, Minnesota to really appreciate what I missed when I lived in Wyncote.

Duluth is a city that financier Jay Cooke really seemed to take a liking to. Cooke influenced the Northern Pacific Railway, which he heavily financed, to run through Duluth so that he could help build it into the "new Chicago". He planned on Duluth becoming a major shipping point for rail and boat traffic. While Duluth's success never mirrored that of Chicago, Cooke's influence on the city can be felt even to this day. There is a nice statue of Jay Cooke located near the Lake Superior lakefront and a nearby state park (which happens to be a really great one) is named in his honor as it encompasses land that was owned by Cooke and donated by his descendents.

Upon reading about Jay Cooke during one of my visits to Jay Cooke State Park, I learned that he had spent a good deal of his life living not too far from where I grew up, on his Ogontz estate. While the estate no longer exists today, I learned that Jay Cooke is buried in Saint Paul's Episcopal Church in Elkins Park, a church that he helped to fund the construction of.  I decided to spend one of my days staying at my parents' house to visit Jay Cooke's grave and some other interesting local historical sites.

The first stop on my walking tour was Beth Shalom synagogue. While the synagogue is not really all that old, it is significant in that it was designed by Frank Lloyd Wright. It is the only synagogue designed by Wright and was completed in 1959. In 2007 the National Park Service named Beth Shalom a National Historic Landmark.

The next stop on the tour was just a bit further down Old York Road at Wall Park. Inside Wall Park is the Richard Wall House or "The Ivy". The first section of the house was built in 1682 making it the oldest house in Pennsylvania that has had continuous family residency. Tours are offered on Sundays, but unfortuntely I will be unable to attend one due to my half marathon. A view of the exterior was quite interesting though.

From the Wall House I moved further down Old York Road to the aforementioned Jay Cooke grave. St. Paul's church is a pretty old church and also located on the grounds is the Jay Cooke memorial which appears to be a small chapel dedicated in honor of Cooke.

From the Cooke grave site I headed east on Ashbourne Road with my intended destination being Lynnewood Hall. On the way to Lynnewood Hall however, I made two unexpected discoveries. The first discovery was a small family cemetery containing the graves of members of the Shoemaker family. The Shoemakers were instrumental in the early development of Cheltenham Township and built a mill on Tookany Creek near the Wall House.

﻿﻿﻿﻿
The second discovery was of a vast estate called the Elkins Estate near the Elkins Park Post Office. The Elkins Estate was built as a summer retreat for railroad magnate William L. Elkins. It was designed by architect Horace Trumbauer who also designed the Philadelphia Museum of Art. For years the estate was owned by the Order of the Dominican Sisters of St. Catherine de Ricci who operated a retreat there until financial constrints forced them to sell. The estate was purchased by the Land Conservancy of Elkins Park in 2009.

Finally, I made it to Lynnewood Hall.

Interestingly, a few weeks ago I was on Yahoo's homepage when they ran an AP story about the old mansion and its sadly deteriorating condition. I decided to come have a look for myself. This mansion, like the Elkins Estate was built by Horace Trumbauer. It was built for businessman Peter A.B. Widener. Right now the mansion has an uncertain future.
Posted by Eric, Noelle and Sierra Grunwald at 3:14 PM