This morning started our overcast, but at least it wasn't raining! I hit the trail early, ready for another epic day-hike. Today's itinerary was a bit less strenuous than yesterday's. I planed 15.5 today as opposed to 18 yesterday. The hike started out uneventfully. I hiked along the Lower Mount Cammerer Trail to a little overlook.

After that bit of excitement I started to ascend passing stone fences and other signs of former habitation along the way.

I kept going up, up, up! Finally I reached the junction with the Appalachian Trail and headed up even more steeply. I passed a lot of backpackers on the Appalachian Trail. I wonder if any of them were thru-hikers? Speaking of which, it was 9 years ago today that I started my thru-hike at Springer mountain in Georgia. It's hard to believe that it was that long ago.

I reached the Mount Cammerer Trail and quickly made my way to the old Fire Lookout. I had been here a few months before with Noelle. It actually looks like someone may have fixed it up a bit since then. I signed the register, 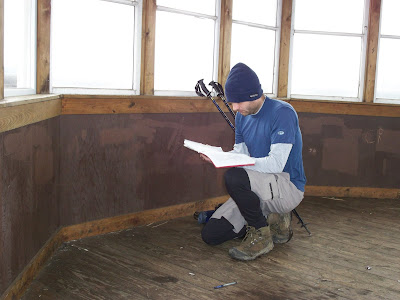 ate a snack, then headed back to the Appalachian Trail to Low Gap,

then back to the (Bill?) Cosby Campground. Another good hiking day. I even found some time to stroll along the short interpretive trail in the campground.
Posted by Eric, Noelle and Sierra Grunwald at 10:31 PM No comments:

Last night I drove to the Smokies after parting ways with Noelle. I was excited to be there, but bummed that Noelle wasn't there with me. It was drizzly as I pulled in to the Cosby Campground and realized that I didn't have any cash to pay for a campsite. I would have to drive a few miles back to town to get some money. When I finally got back to Cosby, I set up camp and paid for three nights. I settled in for a chilly night's sleep.

This morning I awoke to blue skies! It was cold, but it would be nice to hike in some nice weather. I had picked out a long 18 mile to hike. I would start out on the Gabes Mountain Trail and check out Hen Wallow Falls. 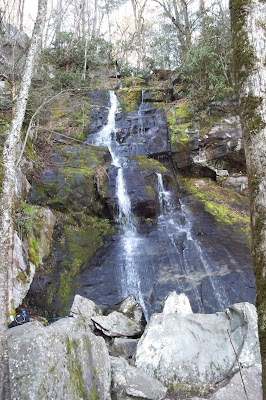 From Gabes Mountain I would head up Maddron Bald Trail to the Albright Grove Loop.

I carried out my plan well and was impressed by the large, old-growth trees in the Albright Grove. 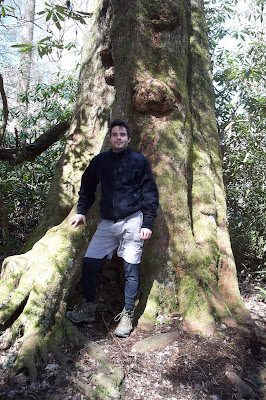 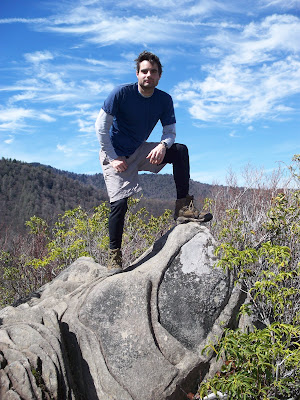 The bald was unimpressive, but there were some views along portions of the trail.

I would then hike up to the Appalachian Trail and bushwack over to Inadu Knob.

The area around the Knob was interesting in that there was a lot of what appeared to be plane crash wreckage scattered around the area.

After Inadu Knob I headed down the Snake Den Ridge Trail to the lower elevations of the park where the ground was carpeted in wildflowers. 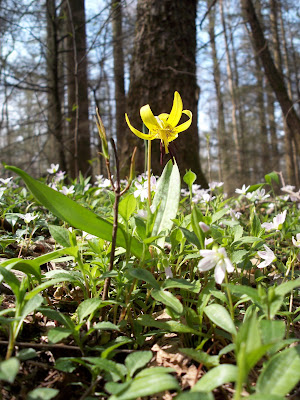 blood root, and countless small white flowers of different varieties which I could not identify. I'm spending another night here at Cosby Campground recovering from a long day of hiking.
Posted by Eric, Noelle and Sierra Grunwald at 10:11 PM No comments:

It rained hard last night. I was glad that Noelle and I stayed in the cabin and were not camping in the rain and lightning. This morning despite some drizzle and wind our spirits were high for our long anticipated backpacking trip. Noelle made some last minute preparations, then we checked out of the cabin and headed to the Bandy Creek Visitor Center to get our back-country permit. After that was done we drove to Leatherwood Ford where we dropped off the Subaru. We should have been a little bit more observant when we were there. It would have saved a lot of driving.

From there we both took the Civic back past the Pickett State Park office to the point of the highway where the John Muir Trail crosses. There's a small parking lot there where we parked, got our gear ready, then hit the trail. 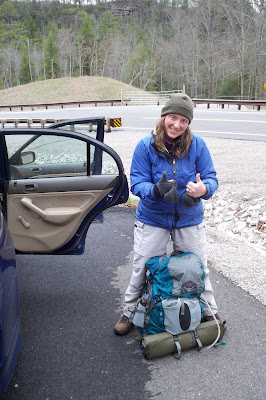 It was a bit chilly and drizzling slightly. We were happy to be on the trail though. That is until we lost the trail. We hadn't even been on it for 5 minutes when the trail abruptly ended in a large swampy area. There were no blazes to be seen anywhere. We backtracked and still no sign of trail. Finally we gave it one last try. We noticed that an old road that the trail followed made its way into a creek. Sure enough, on the other side was trail sign. We would have to ford the creek. Eric took off his shoes and socks and started to wade across the swollen creek. The water was deeper than it looked and it reached up to near his hips. There was no way Noelle would make it! To top that off, the map showed that we would have to ford the same swollen creek three more times!

Our backpacking trip had ended just as quickly as it began. We hiked back to the car and thought of something to do to salvage the day. After thinking and crying for a bit we finally decided to head over to Colditz Cove State Natural Area. It is the site of Northrup Falls.
We drove the Civic through some small east Tennessee towns like Aldardt, and finally arrived at Colditz Cove. Let's just say this place was well worth the visit. With all the recent rain the falls were flowing strong and the setting was beautiful. 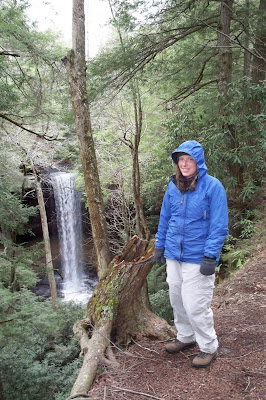 A good time was had by all.

After visiting the falls we headed to Oneida where we got a surprisingly good lunch at a Mexican restaurant, then back to Leatherwood Ford to pick up the Subaru. When we got to Leatherwood I decided to take a look at the river. The footbridge across was completely covered with water. We couldn't have started our hike from this side either. The ranger at the VC should never have issued the permit. Oh well, five dollars down the drain. Noelle and I decided that we would part ways. She would head back to Lexington, while I would head down to the Smokies for a few days in the mountains.

Posted by Eric, Noelle and Sierra Grunwald at 9:46 PM No comments: 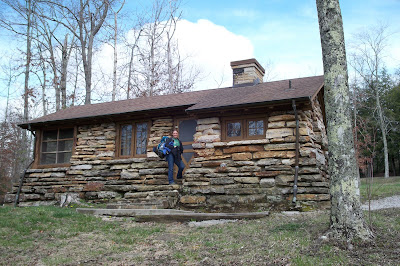 Today Noelle and I packed up our backpacks, grabbed our easy-to-prepare meals, and headed south to the Big South Fork. Okay, technically we headed to Pickett State Park, but we're close enough. For several weeks we've been planning a backpacking trip on the John Muir Trail. Unfortunately, the weather forecast for today called for severe weather. As a result, we've delayed the start of our backpacking for tomorrow. As for tonight, Noelle rented an awesome CCC-built cabin here in Pickett State Park.

The weather during the day turned out to be not as bad as predicted, so we took the opportunity to do some hiking along a few of the park trails. The highlight was a short trip along the Ladders Trail.

Because of recent rains the small stream the trail travels along was much higher than normal, forcing us to wade through some cold water. 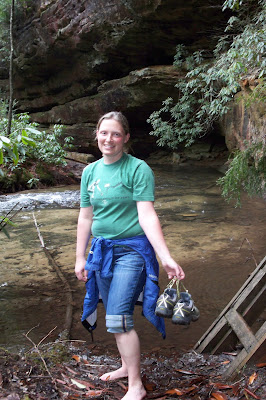 It was fun though!
Posted by Eric, Noelle and Sierra Grunwald at 9:32 PM No comments:

It's been a while, but Noelle and Eric have finally found themselves a little bit of adventure. Today it was in the form of a footrace, the third annual Shamrock Shuffle. Conditions were less than ideal this morning. It was cold and rainy. However, the dynamic duo found a way to persevere in the adverse conditions to run respectable times in this short three kilometer race. Eric ran 11:16 and finished third in his age group, while Noelle nearly broke 18 minutes. We had a good time despite the rain and Eric thought it would make a good speed workout for his upcoming marathon attempt. Complete results of the race can be found here.
Posted by Eric, Noelle and Sierra Grunwald at 4:19 PM No comments: