Today was forecast to be a beautiful, warm winter day, so Noelle, Sierra, Mom T and I took advantage of it and headed out for some adventure on Kabetogama Lake. We stopped at the visitor center to use the restroom and then headed out on the ice road to the Sphunge Island Sledding Hill. 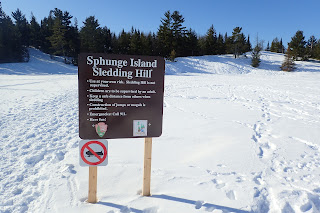 We immediately hit the slopes. Sierra insisted on sledding down the steepest, highest part of the hill, but Noelle and I did not allow her to, for fear of her safety. She shed a few tears and then finally got on a sled and started to have an awesome time. 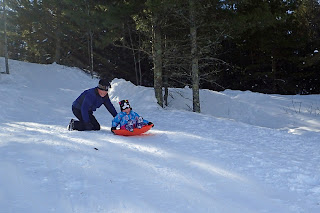 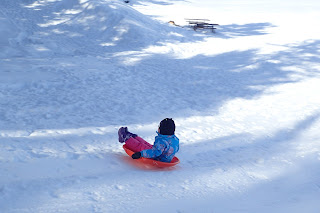 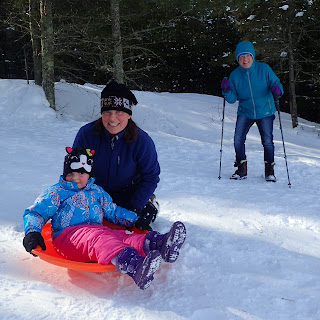 The hill is fairly steep, but not so steep that we felt injury was likely to happen. The most difficult part of the sledding was hiking back up to the top of the hill. 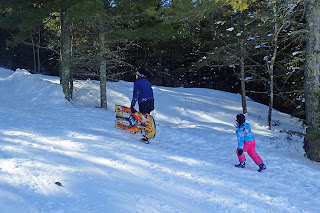 Grandma came along, but mostly she was a spectator. 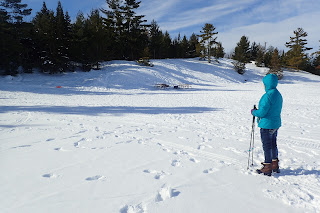 We made several runs (probably about 20) before stopping for a snack and then moving east on the ice road to Ash River.

At Ash River we decided to go for a short snowshoe to the Beaver Pond Overlook. It's only .15 miles, but with untracked snow, it was pretty more difficult for Sierra, especially since she insisted on breaking trail. 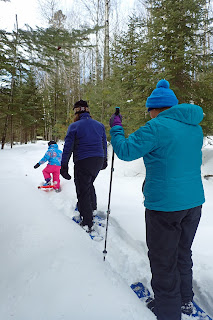 We passed some interesting looking ice formations that had frozen to the rock cliff off to the side of the trail. 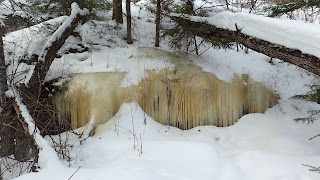 When we arrived at the overlook, we relaxed a bit 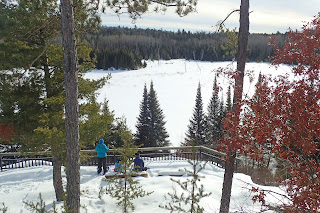 and Noelle built a "snow beaver" 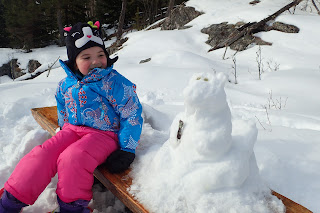 since there was no way we would be seeing a real beaver this time of the year.

Eventually, we started to make our way back to the car 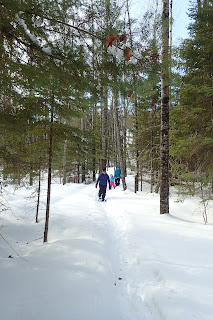 and said goodbye to Grandma, who headed back to Wisconsin. It was a slightly sad ending to a wonderful day!
Posted by Eric, Noelle and Sierra Grunwald at 11:20 PM No comments:

This afternoon, Mom watched Sierra and so Noelle and I had a chance to get out and go for a snowshoe without a four year old who likes to flail around in the snow. We headed over to the Black Bay Beaver Pond Trail. 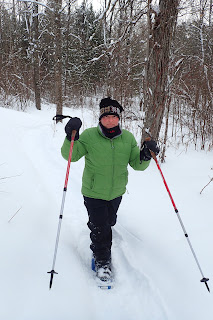 What we both remarked, was how different this hike was compared to our last time together on it. No Sierra or ripe blueberries to slow us down. The only thing slowing us down this time was the deep, mostly un-tracked snow. 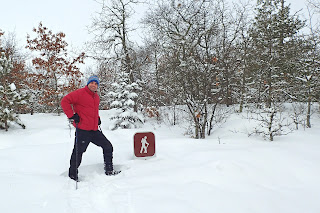 It was a quick walk to the beaver pond overlook. 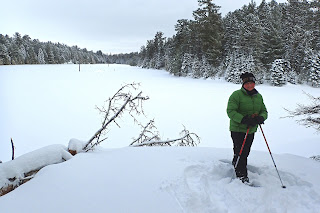 We admired the view from there for a short time and then retraced our snowshoe tracks back to the waiting car. 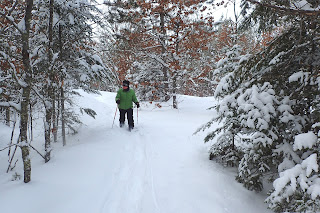 Posted by Eric, Noelle and Sierra Grunwald at 9:39 PM No comments:

It was snowing pretty steadily when we woke up this morning, but eventually we were able to get going and head out for some adventure. There was about 3 inches of new snow on the ground when we made the drive out to the Rainy Lake Ice Road and headed over to its current end, near Bushyhead Island. We strapped the snowshoes on our feet 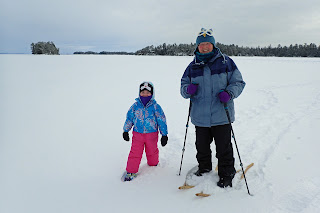 and set off in pursuit of adventure! 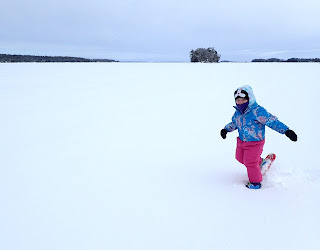 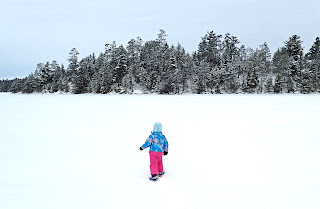 Our first stop was the mine adit. 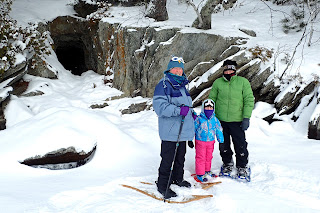 This time I went as far inside as I could before it started to get too warm to form ice. 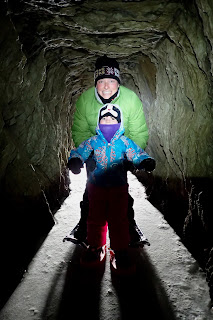 I didn't want to break through and get my feet wet and so at the point the ice started to make cracking sounds, I turned around. I did spy a hibernating bat at the turnaround point. There were also some really cool icicle stalagmites.

We headed out of the adit 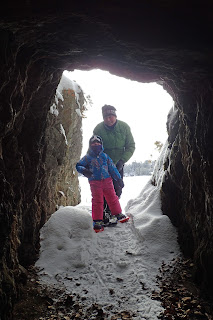 and  and started to make our way around Bushyhead Island in a clockwise direction. 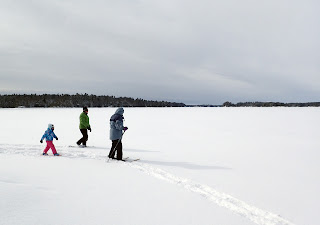 There were some cool cliffs on the northern side of the island. 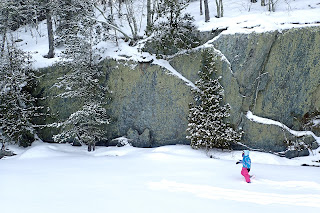 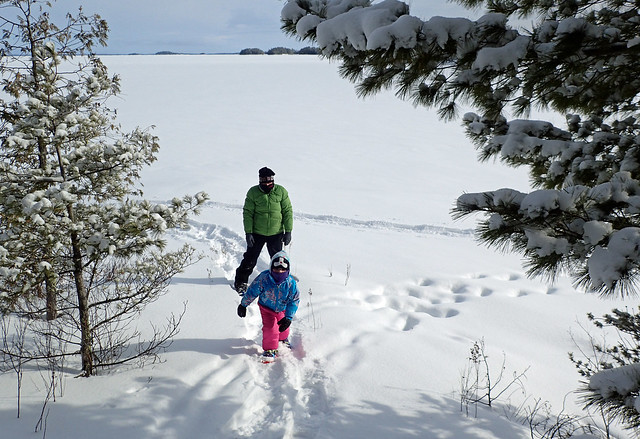 that I followed to a great view from the summit of the hill there.

Sierra followed me partway up 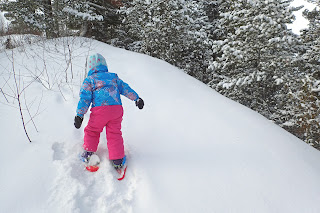 and even enjoyed rolling down a short portion of the hill. Then we started to make our way back to the car. Sierra got in her obligatory snow angel 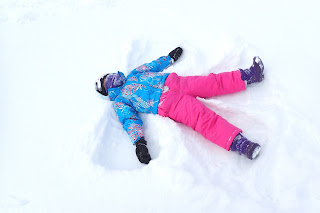 before we made it back to the Subaru.
Posted by Eric, Noelle and Sierra Grunwald at 4:25 PM No comments: