It was a beautiful, warm, sunny winter day and I decided to take advantage of it by heading out for some adventure. I would be headed down to the Ash River area of Voyageurs National Park to complete a snowshoe hike that Noelle, Sierra and I had started last weekend. See, last weekend we had gone sledding at the Kabetogama Lake Sledding Hill,
then driven the Kabetogama Ice Road over to Ash River where we donned our snowshoes and set out to explore Lost Lake. 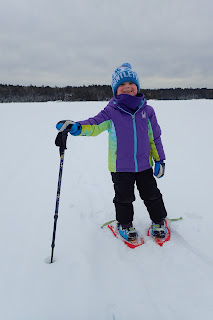 Unfortunately, after a full morning of sledding, Sierra was pretty tired and we didn't get to see all that much of Lost Lake. I did, however, see some otters playing around on the ice and when I had returned to the site today I had noticed that they left evidence all over the place on the snow. 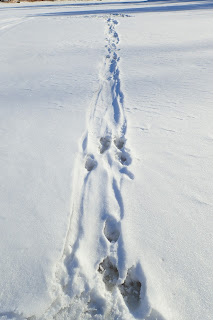 Anyway, after checking out the otter tracks I snowshoed over to the Lost Lake campsite to investigate. 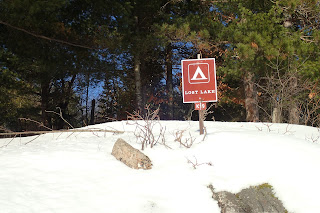 Sierra really wants to try a canoe camping trip this summer and I thought a short paddle might be the best way to give it a try. I think the campsite there might be one of our best options. Hopefully this pumpkin witch is gone by summer! 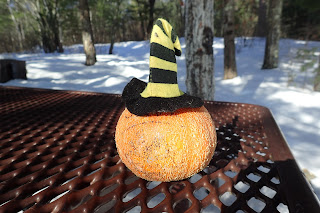 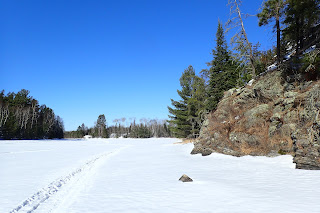 and quickly found the portage that connects Lost Lake to Long Slough (Slu). 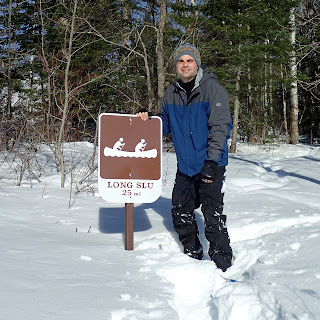 It was an easy hike, even on snowshoes, but with vegetation so close to the trail, it probably makes for a pretty rough .25 mile portage when you're carrying a canoe.

The area on the other side of the portage is pretty scenic. 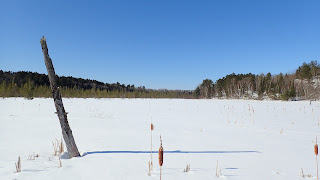 There was lots of fresh evidence of beaver activity and even a hole in the ice that it was obvious that beavers have been using pretty frequently. 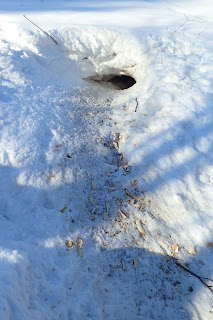 I then took a side trip over to a beaver pond whose dam looked to have breached at some point. 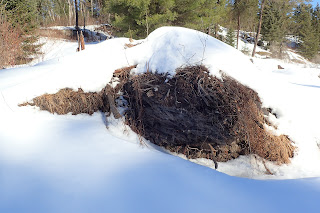 If there were any people around when that happened, it must have been pretty exciting! I then trudged through the snow 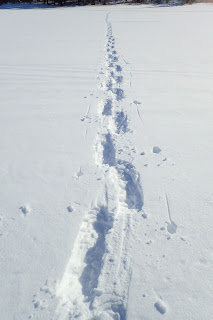 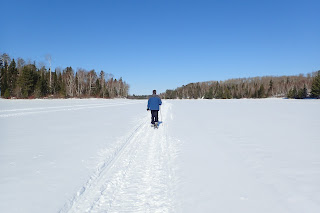 I made my way to Lost Bay and made a left turn.

By this time the temperature was climbing and the snow was getting wet and sticky. Snow would build up in the crampons of my snowshoes and get heavier and heavier with each step until, eventually it would fall off and the process would start all over again. There was a fair amount of snowmobile traffic, which surprised me a bit, since we were so far from the staked, groomed trail. Walking in their tracks made my hike so much easier though!

Eventually I made my way out of the bay and onto Kabetogama Lake. I stopped at the Round Bear Island Day Use site 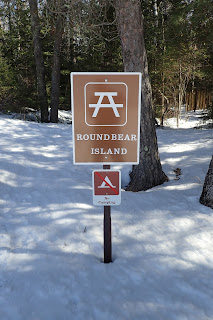 to eat a snack and rest in the sun. Having eaten, I moved on past scattered islands. 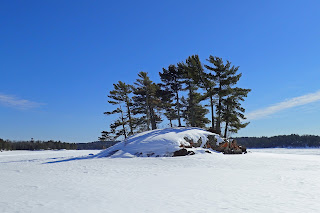 I was getting pretty tired by the time I could see the Ash River Visitor Center sign. I opted to walk the Ice Road for the last stretch of my journey to save my tired legs a bit. 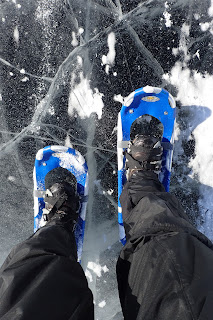 I have mixed feelings about the impending end of winter. I am definitely ready for warmer temperatures, but I'm not looking forward to the "in-between" season when there's just not a whole lot to do. Hopefully I still have a few weekends of winter adventures left!
Posted by Eric, Noelle and Sierra Grunwald at 4:00 PM No comments: